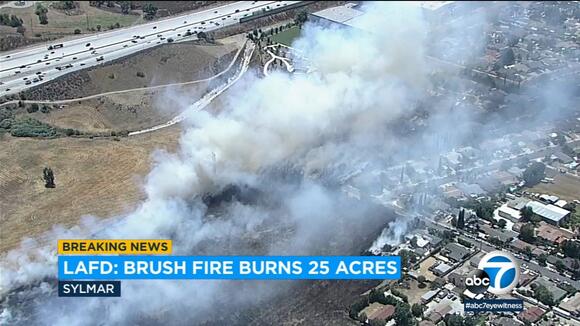 A dramatic brush fire erupted Thursday afternoon in Sylmar, which threatened a nearby neighborhood of homes and prompting a massive response from firefighters on the ground and in a helicopter overhead.

The blaze was reported shortly before 2 p.m. near the 15000 block of West Lakeside Street, according to the Los Angeles Fire Department.

No injuries or structural damage were immediately reported.

Authorities said by 3:34 p.m., forward progress of the fire had stopped at approximately 25 acres, but no structures were damaged.

Video from AIR7 HD showed desperate residents attempting to dowse flames with water from garden hoses as the fire came dangerously close to their houses.

A dramatic brush fire erupted in Sylmar, threatening a nearby neighborhood of homes and prompting a massive response from firefighters.