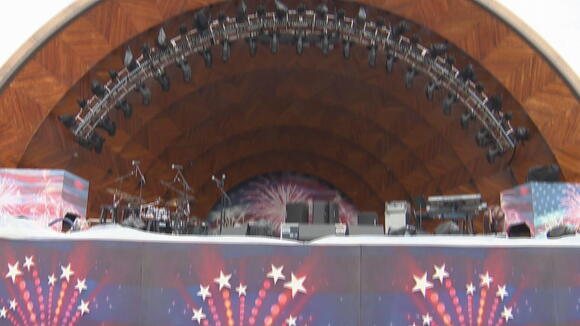 BOSTON — The forecast for the Fourth of July is looking good for the Boston Pops concert on the Esplanade, where the setup has been underway for days now.

From sound checks to camera adjustments, final preparations are underway at the Hatch Shell on the Esplanade for the 2022 Boston Pops Fireworks Spectacular.

Organizers say this will be a historic, star-studded event.

“They can expect Chaka Khan, who is going to be here for the Fourth of July event. And Tony Award- winner Heather Headley, and the Boston Pops,” said Pam Picard, Executive Producer and Event Director of the event..

Also performing will be “The Voice” winner Javier Colon, the Tanglewood Festival Chorus, the Middlesex County Volunteers Fifes & Drums and the Honor Guard of the Massachusetts 54th Volunteer Regiment.

The in-person live event, which draws in tens of thousands of spectators, will mark a return to normalcy.

Last year, the Boston Pops performed from Tanglewood and fireworks were launched from the Common. The festivities were canceled altogether in 2020. But 2022 will mark a return to the Hatch Shell, with a “mega fireworks display” over the Charles River.

“This take the cake,” said Lead…