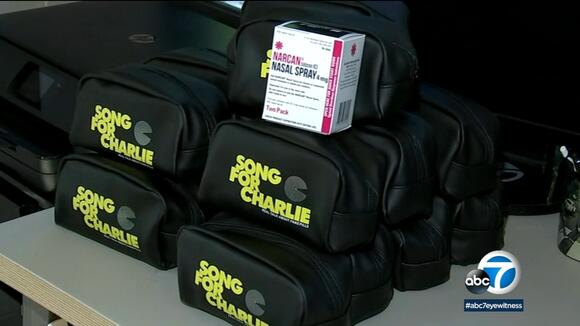 It’s a growing problem – teens dying of fentanyl drug overdoses. That drove this local teen to come up with a life-saving idea and turn it into a reality.

Jasper Tronciale is just 16 but wise beyond his years after a close call with a good friend a few months ago, who mixed alcohol and Xanax.

“It was on like a Saturday night, I think, I was just at home and they were at home too, it was pretty late… they were saying it was really hard to breathe and so at that point, I decided I should call 911,” said Jasper, a junior at Brentwood High School.

Jasper woke up his parents and told them that his friend was in trouble. He may have saved his life by doing so. Now, he’s stepping in to help again by spreading the word on the growing pandemic of fentanyl poisoning.

“Like one pill, like half a pill, a quarter of a pill can kill you,” he said.

For his kit, the teen got the makers of Narcan, which can reverse an overdose, to donate 2,800 nasal spray doses, and the Guess clothing company to make bags. Also inside the kit – there is a slip of paper that lists the key signs of an overdose:

“Small pupils, like falling in and out of consciousness, weak breathing, choking, lifeless body and cold and clammy skin,” Jasper said, reading the symptoms.

The kits are simple, safe and easy to use. Jasper will be distributing these life-saving kits at his high school next month.

“My main idea is for people to just keep it in their car, just in case somebody is overdosing at a party, really wherever, or maybe like a homeless person on the street,” he said.

Jasper teamed up with the nonprofit Song for Charlie, which was created by the parents of Charlie Ternan, after their son died from a fentanyl laced pill .

Jasper and Song for Charlie just want young people to know about the dangers of fentanyl, and they hope these kits will save lives.

And there’s another point Jasper wants to get across to teens: It is completely safe to administer Narcan even if it turns out the victim is not overdosing on fentanyl. This is important because he doesn’t want teens to hesitate to use the Narcan when they are unsure.