Another season of Formula One has come to an end, with Max Verstappen strolling to a second successive title as Red Bull emerged as the dominant team at the beginning of the series’ new era.

2022 saw F1 alter its technical regulations to encourage closer, better racing between drivers, forcing all 10 teams to completely redesign their machinery. That saw the grid order shaken up significantly, but despite early promising signs, the level of thrill petered out as time went by.

After an opening slew of races in which the thrilling tussles between Verstappen and Charles Leclerc teased the prospect of a titanic battle for the title, the action settled down into something of a procession as the Dutchman drove away into the distance race after race, running up an enormous lead in the championship would ultimately saw him take first place with an advantage of over seven race wins’ worth of points.

This is how i saw the season as a whole…

Driver of the year

Who else could it be than Max Verstappen? Red Bull may have built the fastest car on the grid, sure, but Verstappen has been on a different level to the rest of the field in every regard. His pace is searing, his consistency clinical, his nerve unwavering.

It is easy to forget that mechanical failures meant he retired from two of the opening races, leaving him a long way behind Charles Leclerc. He could have taken that start badly, but rallied instead and delivered an utterly relentless campaign to take his second title in the most dominant solo season the sport has ever seen.

Team of the year

Ferrari started the season with the fastest car, but a string of embarrassing strategy errors and a lack of development across the course of the season cost them a shot at either championship by the middle of the year.

Red Bull began with a series of reliability problems, but resolved them post-haste and gave Verstappen and team-mate Sergio Perez by far the best machinery on the grid. Whether on high downforce tracks or circuits which required more straight-line speed, the RB18 was simply fast, and Red Bull’s strategy team and pit stop crew barely missed a beat across 22 races. They fully deserved to win both championships for the first time since 2013.

Race of the year

Verstappen’s dominance meant spectacular Sundays were few and few between in 2022, but there were still a few standouts.

Interlagos is the best track on the calendar, its variety and propensity for changeable weather rendering it a thrill more often than anywhere else, and this year it saw Kevin Magnussen take a shock pole position in the wet before George Russell took Mercedes’ sole win of the season.

The opener at Bahrain was a highlight, too, where Verstappen and Leclerc duked it out as the new era of machinery took the track for the first time.

But the best of the year was the British Grand Prix at Silverstone, where a breath-taking race saw Carlos Sainz take his first ever F1 victory ahead of Sergio Perez and Lewis Hamilton. A late retirement brought out the safety car, leading to a mad dash to the finish line between an aggressive group of drivers out front who fought tail and nail for every position.

Overtake of the year

Sebastian Vettel may have retired from F1 after a couple of nondescript years at Aston Martin, but he saved some of his most impressive driving for the final few races of his career as he let his down and entertained his legions of fans around the world.

The four-time world champion was in particularly fine fettle at the United States Grand Prix, where he hunted down Kevin Magnussen on the last lap and harassed him around the outside of every turn, before making the move stick with a daring dash around the high-speed right-hander before the penultimate corner. Superb stuff.

Best individual drive of the year

The likes of Vettel, Hamilton, Leclerc and Fernando Alonso have all driven plenty of strong races across the course of the campaign, but it is once again impossible to look past Max Verstappen here.

At the Belgian Grand Prix at Spa-Francorchamps, the Dutchman started 14th, but had won the race by the 18th lap after taking the lead post-pit stop. The Red Bull was by the far the fastest car around the high speed track, but Verstappen still overtook team-mate Perez and built up a whopping 18-second lead by the time the chequered flag fell. The 25-year-old was it his imperious best that day.

This is a tough one to call, because of the most those competing towards the top of the order would have already expected to have been doing so, while the likes of and Lando Norris delivered very strong seasons but were already highly-rated and were hampered by cars which were middling at best.

In terms of other youngsters in the field, Mick Schumacher has been dropped by Haas after costing the team too often with un forced crashes, while Yuki Tsunoda made some definite progress relative to team-mate Pierre Gasly but still looks unconvincing plenty of the time.

Let’s throw in a wildcard, then, and give it to Nyck de Vries. The 27-year-old was Mercedes’ reserve driver and competing for them in Formula E at the start of the year, but impressive outings in practice led to an unexpected F1 debut at Monza with Williams due to Alex Albon’s appendicitis, and his superb performance saw him score two points for the backmarker team. That has now paid off enormously for the Dutchman, who will replace the departing Gasly at AlphaTauri next year. A rise few would have foreseen but undoubtedly merited.

Red Bull were already on a charge towards the front in 2021, so they’re ruled out of this one on those grounds.

Alfa Romeo enjoyed a superb opening third of the season, but tailed off significantly in the final stages, unable to develop their car at the rate of those around them. Aston Martin were the opposite, dropping to the back of the grid at the start of the campaign before plugging away and raising back up the rankings to draw level on points with the Swiss outfit by the end of the year.

They may have only finished eighth in the standings, but the honour here goes to Haas. The American team’s existence was under threat in February, when Russia’s invasion of Ukraine meant they cut ties with driver Nikita Mazepin and his billionaire father Dmitry, whose UralKali fertiliser company was the team’s principal sponsor.

They earned a grand total of zero points in 2021, but took their first ever pole position in 2022, and semi regular points finishes represent a significant step forward. If Schumacher had been able to mimic Kevin Magnussen’s form, the team could potentially have finished higher up the order.

This has to be Mercedes. They may have recovered well in the final stages of the year, and the signs look promising for 2023, but the arguably the best team in F1 history built a dog of a car for Lewis Hamilton and George Russell which was beset by problems that led to terrible performance and very sore spines for both men. A very disappointing year for the Silver Arrows. 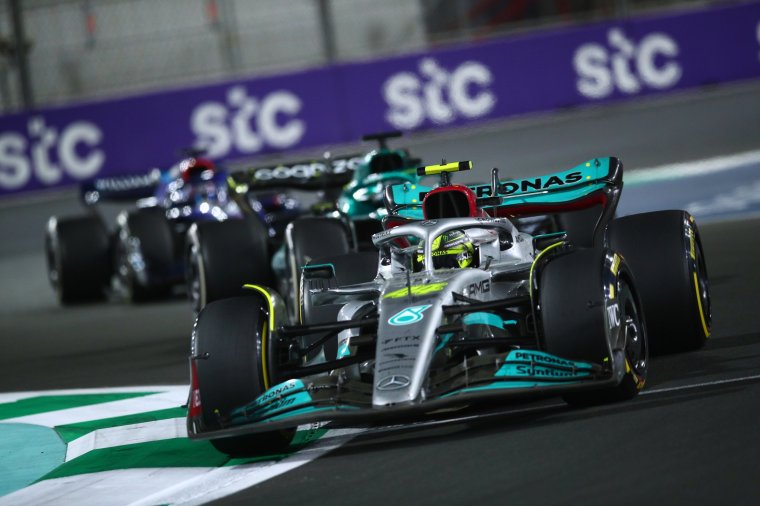 The Saudi Arabian Grand Prix was a joke. The safety of drivers was put at risk as an explosion at an oil facility occurred just six miles from the circuit…