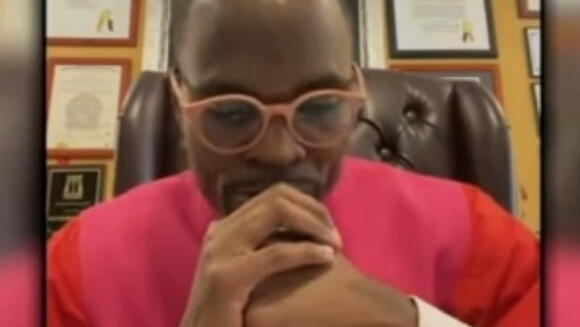 A New York bishop who was robbed at gunpoint mid-sermon this past summer was arrested for a separate incident post-sermon after he grabbed a woman he believed was a threat to his seated-nearby family.

“They lock me up in front of my children, in front of my wife, in front of my church ,” Lamar Whitehead, 44, told the New York Daily News in an interview after he’d been released from a holding cell two hours after the altercation took place on Sunday. “They publicly embarrassed me and then they drop all the charges after two hours and apologise to me.”

While delivering a sermon at Leader’s of Tomorrow International Ministry in Canarsie on Sunday, Mr Whitehead told the outlet that he saw two women enter the church and slide into the back rows of the building.

The bishop says that his awareness was piqued because the women’s demeanour seemed to call back to the same behaviour he’d witnessed this past July from a group of men who robbed him at gunpoint while he was preaching. He noted that the pair had entered “the same way it happened when my church got robbed.”

Social media footage of the incident shows the bishop calling the two women up onto the pulpit, asking if they “want to come preach” before quipping that he’s “gonna make you famous”.

Off-camera, one of the women can be heard screaming before the bishop can be heard shouting for someone to “move her out of here”, the Daily News reported.

One of the women then reportedly ran down the middle-aisle at which point he claims to have thought only of his wife and child seated close by to him.

The incident dredged up all too familiar fears from a robbery that was carried out at the bishop’s church this past summer. When the woman came charging at him, all he could “remember was the guys with the guns who put their gun in my baby’s face.”

In that July incident, Mr Whitehead could be heard in an Instagram live stream saying “alright alright”, as he was seen putting his hands up and then getting down on the ground as a masked assailant appeared onscreen in the footage, obtained by ABC7 .

The robbers demanded jewellery from Mr Whitehead and his 38-year-old wife, police said. They ultimately got away with a bundle valued to be worth $400,000, The Daily Beast reported .

After Sunday’s altercation with the two women, detectives from the 69th Precinct arrived at the Brooklyn church and arrested the bishop informing him that he would be charged with assault.

“There were a lot of little kids in church that are frightened now — again. All the little babies in my church saw me get arrested, the ones that look up to me,” said Mr Whitehead.

After being held for approximately two hours, Mr Whitehead was then released without any charges being pressed against him.

“They dropped all the charges and let me out,” he said, speculating that his release had come from “higher ups” in the NYPD discovering that he was being held.

A spokesperson for the NYPD said in an emailed statement to The Independent that both Mr Whitehead and a 47-year-old woman were removed from the church on Sunday after receiving 911 calls for a disturbance at the place of worship.

Without addressing Mr Whitehead’s arrest and later release, the spokesperson confirmed that one of the women, the unidentified 47-year-old, had been arrested and charged with trespassing and disrupting a religious service.

Mr Whitehead has previously drawn criticism for his lavish jewel collection that he and his wife are known to display, but he has pushed back against the accusation that he is in any way “scamming” his parishioners.

“It’s not about me being flashy. It’s about me purchasing what I want to purchase,” he said. “Y’all not gonna tear me down by your childish thoughts. I’m going to stay focused.”