On the eve of England’s first World Cup match, Gareth Southgate suggested that international form is a myth. It’s just as well, given that his team haven’t won in six matches. There is an assumption amongst the public that England received a favourable group stage draw – every opponent in this group is ranked at least 15 places below Hungary, who beat England 4-0 at Molineux in June.

Tournaments can exist in their own bubble. Southgate understands that more than most, given the transformation in the national psyche during the 2018 World Cup. Previous England teams peaked in qualifying, and Southgate is out to prove that his era is one of tournament focus. He namechecked Germany’s golden decades – nominally 1966 to 2006 – as the standard to which England must aspire.

Have England ever needed a good start to a tournament more? The negativity around the off-field issues of this tournament that bleed into the actual football; the vague sense of apathy at home at a winter World Cup; the nagging but inescapable truth that this England manager and team, fairly or otherwise, have lost their lustre.

The England team has always needed to convince its public – there was widespread caterwauling after the 0-0 draw at Wembley in the first game of the 1966 World Cup – but stumble here and they may not get up again.

The easiest method for Southgate to win over his public is through aesthetic, artistic, attacking wonder. He could reason that England will control possession against Iran and face a stubborn, deep-lying defence, picking a back four and midfield three containing Declan Rice, Jude Bellingham and Phil Foden with Bukayo Saka as the right-sided forward alongside Raheem Sterling and Harry Kane. “Go out there and get them and win it by half-time.” You can’t actually imagine Southgate saying these words.

Or he could stick what he knows, protecting Jordan Pickford with three central defenders, asking the full-backs to get high up the pitch, allowing the two wide forwards to drift infield and look to win matches in a series of moments as he did in the first four games of Euro 2020. Southgate – ever the diplomat – makes the point that he can do both at once.

“We have got players that are used to playing in both systems,” he says. “But like every team in the modern game you play a system and build up in a certain way, and you defend in a certain way and you’re rarely in the tactical shape that is written on the teamsheet. It’s all very, very fluid. The key for us is there are some basic principles of how we defend and attack that are exactly the same whatever the formation is.”

“Plus ca change,” was Southgate’s take when asked about the criticism of his supposedly defensive style. He pointed out that England’s Euro ‘96 team, of which he was a part, scored four times against the Netherlands but only managed four goals in their four other matches. Southgate appears to disagree that “just attack more” is an answer, or at least is an overly simplistic one, and never has been. History is viewed with a rosy tint. 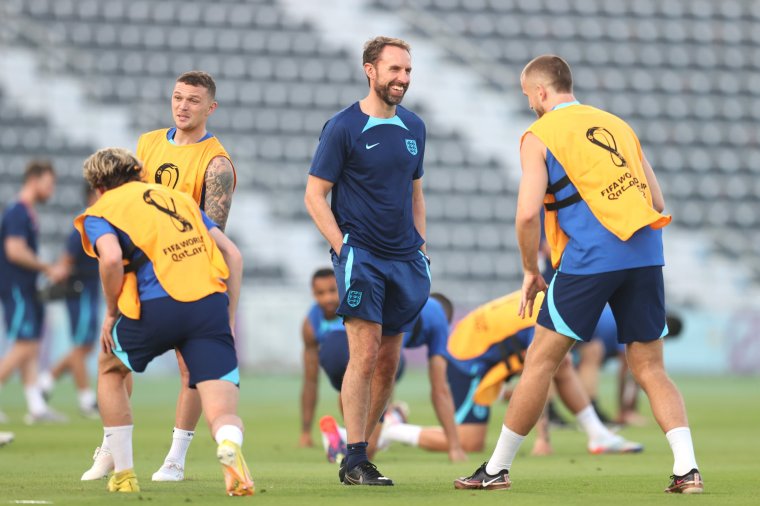 Southgate has had less …