England fans clocked on early or are working from home today so they can watch the team’s World Cup opener against Iran.

Gareth Southgate’s team kick off their campaign in today’s Group B clash in Qatar, which kicks off at 1pm UK time.

The lunchtime start has left millions of fans scrambling to ensure they can take in the match, with Three Lions followers coming up with inventive ways to tune in.

According to the Advanced Workplace Associates, only one in five employees will be at their workplace for today’s game, as fans take advantage of the working from home culture that has continued post-pandemic.

One fan tweeted: “Today I shall mostly be rocking up to work, having a brew and then leaving work to watch England. Nowt like a satisfying Monday at work.”

Another wrote: “At work early to get done for the England game… yeah this is strange for a World Cup.” 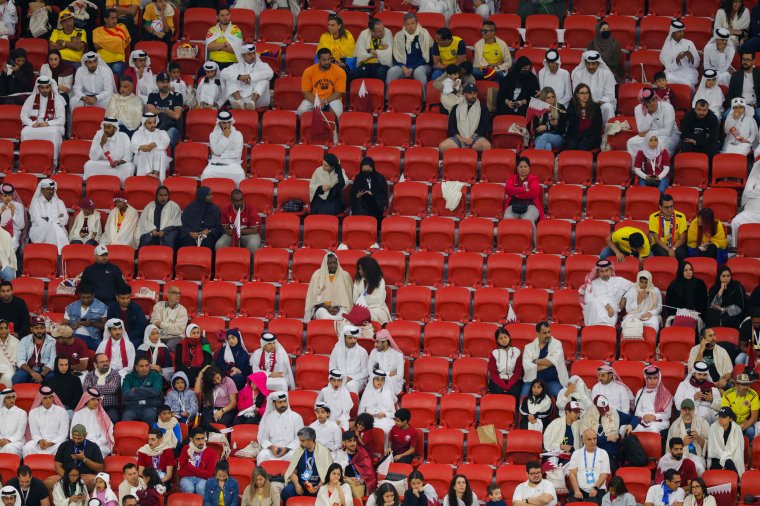 Thousands of empty seats could be seen inside the Al Bayt Stadium during the second half of Qatar’s World Cup opener against Ecuador on Sunday (Photo: Odd Andersen/AFP/Getty)

Others spoke about choosing to work from home in order to have the “game on in the background”.

According to YouGov, the last time England played an international tournament fixture on a weekday during normal working hours was against Wales at Euro 2016 for a 2pm kick off, with employees downing tools costing the UK economy an estimated more than £250m in lost revenue.

A survey by the pollsters shows that one in eleven English workers who intend to watch the Iran game say will do so during work without their boss knowing.

The report also found that 13 per cent of fans have arranged to take time off to watch the match and another 16 per cent will watching the game with the approval of their employer.

Around 11.4 million people watched England’s opening World Cup match against Tunisia in the 1998 tournament when the match kicked off at 1.30pm.

The advent of online viewi…