“It wasn’t until I played Thelma,” writes Geena Davis, “that I realised I may have wanted to become an actor so fervently because I could use acting to fill out the persona of someone confident in their abilities – someone I desperately wanted to be like in real life.”

From assault-victim turned outlaw in Ridley Scott’s Thelma & Louise to the president in Commander in Chief, Davis has spent her career seeking out ballsy roles, while battling a chronic tendency towards people-pleasing off screen. “Though my characters were bold before I was, that boldness rubbed off on me,” she writes and the book is a more or less chronological account of her career and what she calls “my journey to badassery”, complete with some of her own sketches and a section of family photographs.

Davis, now 66, announced her intention to be in the movies at the age of three, thus displaying a penchant for attention-seeking quite at odds with the prevailing mores of Wareham, Massachusetts, in the 1950s. Even her name comes from a desire to avoid being impolite. For years, Davis fondly thought her mother didn’t know the correct way of spelling “Gina”; she was well into her 20s before her mother explained: “I didn’t want anyone to think it was pronounced ‘gina’. As in va-gina.” “It turned out my entire identity was based on the fear of vaginas,” Davis notes drily.

The representation of women and girls in the industry, on screen and behind the camera, is a drum she beats unapologetically throughout and the book is peppered with anecdotes that paint a depressingly familiar picture of the way female actors were treated. There’s the director who asked her to audition by sitting on his lap while he rubbed his face in her breasts (she complied) or the time Bill Murray, during a meeting, insisted on trying out a massage machine on her, despite her repeated refusals. (The other men in the room did nothing to make it stop.) Murray later screamed at her on the set of Quick Change for being late (she wasn’t) in front of their colleagues. “I tell this story because some time later we appeared together on The Arsenio Hall Show to publicise the movie,” she writes. “You can look it up on YouTube. Watch how Bill flirts with me and paws at me and even pulls down the strap of my dress… For that matter, notice how I giggle and go along with it, as if we’re great pals; as if the raging hadn’t happened, as if the way they’re both objectifying me is really fun. Like so many women in a situation like that, I didn’t know how to avoid being treated that way; I shut up and played along.” 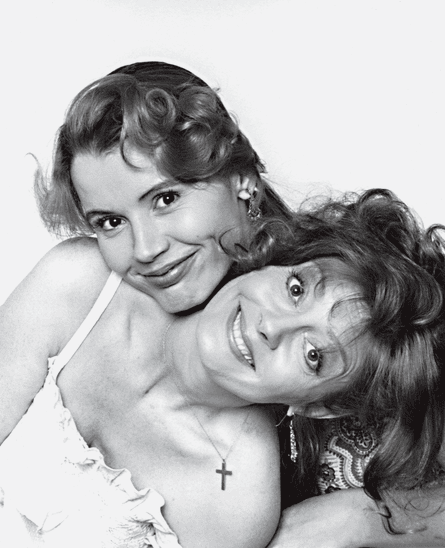 Davis, top, with Susan Sarandon in 1991: ‘Susan has changed my life more than anyone I’ve ever known’.

Until she met Susan Sarandon. “Susan has changed my life more than anyone I’ve ever known.” (Some of that self-belief evidently rubbed off; when the film roles dried up in her 40s, Davis took up archery and within a couple of years was ranked 29th in the US Olympic trials.)

She has erred on the side of jaunty and conversational rather than soul-baring in the book and her combination of humour and self-deprecation is immediately appealing (she includes a section of verbatim encounters with the public that would puncture any Hollywood ego). Some readers may feel cheated that there is more detail here about her pets than her children, or that she is so reticent ab…