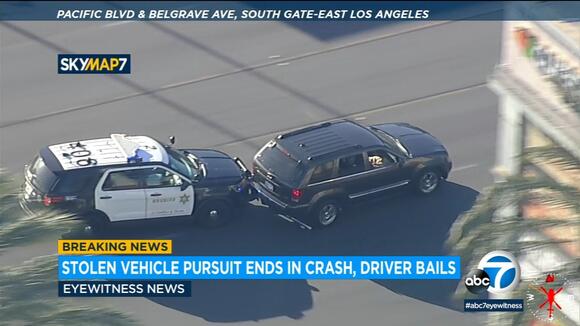 A man behind the wheel of a stolen SUV on Wednesday afternoon led sheriff’s deputies on a wild high-speed chase through southeast Los Angeles County before crashing in downtown L.A., authorities said.

The pursuit, which began in East L.A., made its way on surface streets through the cities of Vernon and Huntington Park before entering Boyle Heights.

At one point as many as half a dozen L.A. County sheriff’s patrol vehicles were behind the Jeep Cherokee as the speeding driver remained elusive.

Shortly before 5:30 p.m., California Highway Patrol officers joined the chase as it became more and more dangerous, with the suspect narrowly avoiding pedestrians in crosswalks and innocent motorists in rush-hour traffic.

A spike strip was deployed at one point, but it was unclear if any of the SUV’s tires were punctured as a result.

‘True Crime: On the Run’ gives an inside look at police chases

“True Crime: On the Run” is an in-depth look at our obsession with police …