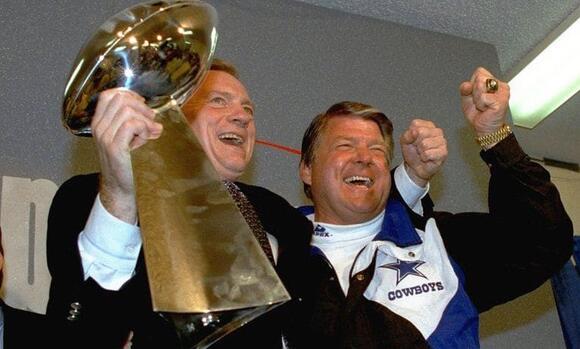 Jerry’s promise is, we are quite certain, an inevitability. But Cowboys Nation would surely like this fence mended and would like closure in celebration of the three-time Super Bowl champ co-architect’ed by these two.

FRISCO – It’s been almost a year now. And the Deflection Dance continues.

Last summer, Dallas Cowboys owner Jerry Jones revealed on on national television that his Super Bowl coach, Hall of Fame member Jimmy Johnson, was destined to also be enshrined in the Cowboys Ring of Honor.

At the moment, Jimmy quipped, “While I’m alive?”

Jerry’s promise is, we are quite certain, an inevitability. But Cowboys Nation would surely like this fence mended and would like closure in celebration of the three-time Super Bowl champ co-architect’ed by these two.

But “inevitable” apparently doesn’t mean “now.” … and remember, this is different than Jimmy’s appearance at AT&T Stadium last year to receive his Hall-of-Fame honor .

During the 2021 season, a fan asked Johnson, via the former coach’s Twitter account, if he has heard anything from Jones about the specifics of him getting into the Ring of Honor.

This is … not great.

And now comes this week’s queries pointed at Jones, and his answer of avoidance.

What about this year and the Ring of Honor?

“Nothing determined out there at all,” Jerry said. “That’s something that I’ve never really decided upon almost until a week or two before I do it. … But as far as the timing of any individual that will ultimately in that Hall of Fame, I don’t have that.”

Certainly, Jimmy could have ignored that Twitter question; we work on the assumption that Johnson, busy in his role as a FOX Sports analyst and also busy with his lovely life after football, does not respond to every single fan who posts a query on his Twitter account.

Jones has publicly admitted that he “f’d up” in ways that led to their 1994 breakup , and Johnson has countered that he shares in the blame.

And all of that is true. They both built it. And they both broke it.

But now, as the two men approach their 80’s, there is only one person who can make the final repair to the relationship. That final repair is about a phone call, a scheduled date, and an AT&T…