In a day of high drama at the Cop27 UN climate summit in Sharm el-Sheikh, Egypt, bitter conflict broke out between wealthy and poorer nations. Some of the world’s poorest countries denounced the rich for delaying action and refusing financial assistance to those suffering devastating extreme weather.

Rich countries sought to argue that rapidly growing economies such as China and oil producers such as Saudi Arabia and other petro-states should contribute to rather than receive from funds to repair climate “loss and damage”.

Vanessa Nakate, a youth activist from Uganda, said: “Cop27 was meant to be the African Cop, but the needs of African people have been obstructed throughout. Loss and damage in vulnerable countries is now unignorable, but some developed countries here in Egypt have decided to ignore our suffering. Young people were not able to have their voice heard at Cop27 because of restrictions on protest, but our movement is growing and ordinary citizens in every country are starting to hold their governments accountable on the climate crisis.”

The UK fought hard throughout the day to keep alive a global vow made last year at Cop26 in Glasgow, of limiting global heating to 1.5C above pre-industrial levels. Some nations – including Saudi Arabia, Brazil and at some points China – had threatened to unpick this commitment, weakening the temperature goal and removing the requirement made at Glasgow for countries to update their emissions-cutting plans each year. 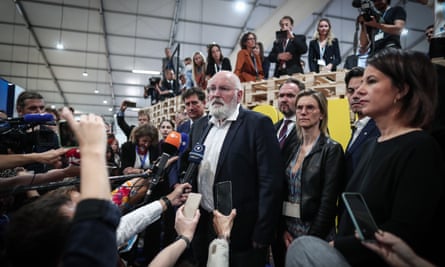 The European Commission vice-president in charge of the European Green Deal, Frans Timmermans, speaking to the press at the conference in Sharm El-Sheikh on 19 November.

That unpicking was unacceptable to many developed and developing countries, which see the Glasgow commitments as a minimum that should be improved on, not rolled back. “What we are seeing is Glasgow minus, and we need to see Glasgow plus,” said one developed country negotiator.

Alok Sharma, the UK’s president of Cop26, warned the Egyptian hosts that the fortnight-long conference would be a failure unless the 1.5C goal was kept alive.

The Egyptian hosts came in for strong criticism over their methods of brokering a deal, by showing drafts of the final text to selected countries individually, rather than allowing them to work together. One veteran delegate called it “un-transparent, unpredictable and chaotic”.

There was also a rare moment of unity, when the US and China unexpectedly patched up their diplomatic row and revived a joint partnership that will mean the world’s two biggest emitters, and biggest economies, cooperate on ways to cut greenhouse gas emissions.

The final marathon negotiating session continued long into the night, past the deadline of 6pm local time on Friday. Workers dismantled the cafes, stalls and pavilions, leaving food and drink hard to find, while delegates rushed to meeting after hastily convened meeting. For long stretches, it was unclear what the format was for trying to reach agreement, and in some cases delegates seemed to be negotiating from different texts.

There were fears that so many attendees were having to leave to catch flights that some negotiating teams would be unable to complete the sessions, and if the exodus continued, the conference of the parties might not be quorate under UN rules.

A commitment to “phase down fossil fuels” was lost after oil-producing countries objected. The conference of the parties (Cop) takes place under the UN Framework Convention on Climate Change, which requires consensus to be reached on all decisions. That means small numbers of countries can hold up progress, to the frustration of the majority.

Fossil fuel lobbyists have been out in force at this Cop, with more than 600 estimated to have attended. Next year’s Cop will take place in oil-producing United Arab Emirates, which many activists fear will mean an even greater role for oil merchants.

The planet’s most important stories. Get all the week’s environment news – the good, the bad and the essential

One of the most Read more – The Guardian | World