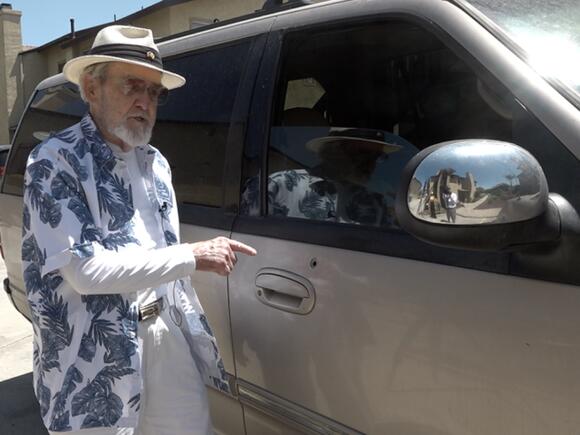 SAN DIEGO (KGTV) – New questions are being raised about an officer-involved shooting outside Harbor Police headquarters in April, which included a stray bullet striking a passing SUV.

Right under Robin Stewart’s passenger window is a reminder of a fun afternoon turned scary.

On April 10, Billy and Robin Stewart celebrated their 44th anniversary with lunch on the waterfront.

The Santee couple had just left the restaurant, and as they turned right onto busy North Harbor Drive, they heard loud noises.

It was the sound on gunshots. One of the bullets struck their SUV right below the front passenger window, inches from where Billy was sitting.

“I felt the impact when the bullet hit the car. That’s when I yelled, ‘We’ve been hit!’” said Billy Stewart, 86.

About a hundred feet away, right in front of the Harbor Police headquarters: a hail of gunfire.

Police body cam shows a man in a car pointing a gun at an officer, before the officer begins firing.

The suspect, who didn’t appear to return fire, was critically wounded, but survived and is facing charges.

Billy, who worked in used car sales, says there is a steel window mechanism near the bullet hole, which likely prevented the bullet from passing through.

Though grateful, the couple is now raising concerns about the police response and the numbers of rounds fired.

“To me, it was overkill,” said Robin.

Kevin LaChapelle, a former El Cajon Police officer, says there are no protocols on how many shots an officer can fire while the threat remains, but the risk to bystanders is part of the equ…