A 21-year-old college basketball star was killed and eight others shot when gunfire erupted in Harlem overnight Monday.

Seven men and two women ranging in age from 21 to 42 were struck in a park along the East River in the area of Fifth Avenue and East 139th Street just after 12:35 a.m.

The victims were enjoying a late night gathering when gunfire rang out.

Darius Lee, who graduated from St. Raymond High School in 2019, was rushed to Lincoln Hospital, where he was pronounced dead.

“He’s an innocent kid,” said Darius’ sister Tiara Weaver. “He decided to stay outside one day, and this is what happens.”

“He was a pure soul. So kind,” said Darius’ cousin Thailyn Lee. “Wasn’t into the streets or nothing. He was all about basketball. He didn’t deserve none of this.”

Darius Lee made his family, friends, coaches and teammates proud, and they honored him Monday night in Harlem and Houston.

“We are heartbroken and devastated to learn of the senseless passing of Darius Lee, class of 2018. Our prayers and condolences go out to his family at this time, and we pray for his eternal rest with our Lord. Aside from being a tremendous basketball star, he was a phenomenal human being, and a young man living such a positive life, succeeding in school, on the court, and in life. These senseless acts of violence need to stop…such a tragedy.”

Lee currently played basketball for Houston Baptist University, and there is a growing memorial outside his apartment.

Teammates were in mourning as well, and Hunter Janacek called Lee, “A teammate of mine, a brother, and an elite human being.”

“This past season he scored 52 in a game, his first year in HBU he scored 56,” Janacek said. “Soft spoken, very easy going…He knew his role and played it well, and it showed in his stat sheets. He was a simple guy and never tried to be someone he wasn’t. Very easy going and loving person.”

In the wake of the shooting, Lee’s coach expressed grief and confusion over his star’s untimely killing.

“Darius was a remarkable young man who loved the Lord, his mom, his family, his teammates, his friends, and his entire HBU family,” Ron Cottrell, HBU’s head men’s basketball coach, wrote in a statement. “We are in shock and cannot wrap our heads around this news.”

In spite of the violent circumstance of Lee’s death, Cottrell added that his student-athlete left a positive legacy behind.

Nine people were shot, one of them fatally, when gunfire erupted in Harlem overnight.

“As great of a basketball player as he was, he was an even better person. I can’t even think of basketball right now. I can only think of what a light Darius was during his short time on earth. He was a joy to coach and we loved him so much,” Cottrell wrote.

HBU’s director of athletics, Steve Moniaci, not only expressed sorrow over losing Lee, but also railed over yet another act of gun violence.

“He was a very fine young man who had a very bright future in front of him both on and off the court. This is unfortunately, yet again, another example of the senseless gun violence that seems to be plaguing our country right now and we all pray it will cease,” Moniaci wrote in a statement.

Lee’s impact on the court was also too hard to ignore.

This past season, he was a second team All-Southland Conference selection after leading Houston Baptist in scoring and rebounding. He was also one of the best defenders in the country, finishing sixth in the nation in steals per game.

Darius’ father Eric Lee says his son was once chubby and not a kid you would expect to become a star athlete.

But by 21 years old, Lee had earned one basketball scholarship after another and was a star the university. He was not a young adult anyone would expect to become a victim of gun violence.

Five of the victims were initially found shot on a footpath over the Harlem River Drive. The others arrived at Harlem Hospital.

“Everybody is sick of the violence,” NYPD Clergy Liaison Reverend Robert Rice said. “I mean, when is enough is going to be enough? When are we going to put these guns down? We don’t want to see another mother bury another child.”

WATCH: Where the gunfire erupted and where the victims fled

Shannon Sohn in NewsCopter 7 shows where the deadly Harlem mass shooting took place – and where the victims fled.

One area resident told Eyewitness News there were so many gunshots she could not believe her ears.

“I was sitting in my living room, and all I heard was sporadic shots ringing,” she said. “Then it stopped and picked back up…You know, it was so many shots. First I thought it was fireworks, and then I thought, ‘Nah, it can’t be.'”

Detectives believe at least three guns were used to fire dozens of shots. They are still trying to determine how many.

They believe multiple people were shooting at each other, likely gang related, and have recovered one weapon.

Detectives say two of the people who were shot have gang ties and believe at least one of them may have been a gunman. 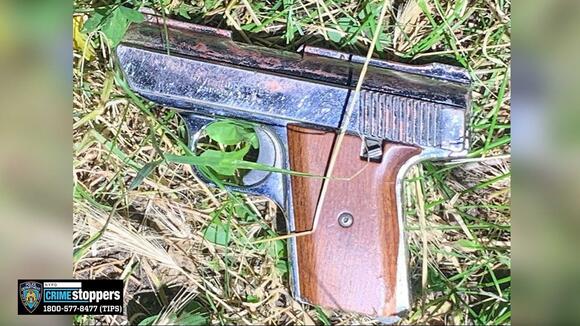 The barbecue appears to have been organized by a local rapper as an event for the community, and a large number of people were in attendance.

“We just think it was a gathering, a barbecue, to that nature,” NYPD Deputy Chief Brian McGee said

The other eight victims are believed to have non-life threatening injuries, but they suffered gunshot wounds to the torso, legs, back and even fingers.

No arrests were immediately made, and it was unclear what prompted the shooting.

Police are asking for the public’s help as the investigation continues.

Anyone with information is asked to call the NYPD’s Crime Stoppers Hotline at 1-800-577-TIPS (8477) or for Spanish, 1-888-57-PISTA (74782). You can also submit tips by visiting the CrimeStoppers website at crimestoppers.nypdonline.org or by messaging on Twitter @NYPDTips.

As of June 20, there have been 277 mass shootings in the U.S. this year, according to Gun Violence Archive .