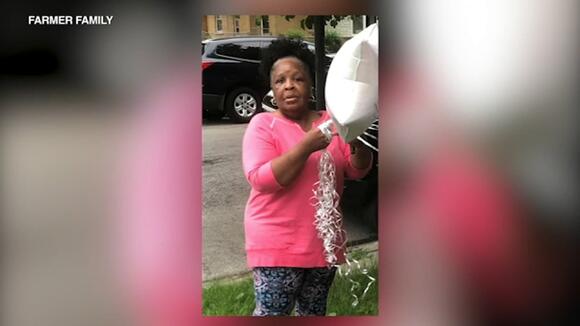 Ari Farmer said he’ll need everyone’s prayers as he stood outside of what’s left of his family home in the city’s Rosemoor neighborhood on the South Side.

It was destroyed by a fire that killed his 71-year-old mother Patricia Farmer and left his father critically injured overnight Saturday, according to the Chicago Fire Department.

“That was my mother. She was my best friend,” Ari said.

Family and friends are now left trying to console one another.

“I love my mother. My mother was a good person, she was a strong woman… I was just here yesterday,” Ari said.

“Everybody in the neighborhood grew up here. I would come over here every day after school, kindergarten through third grade whatever. That porch meant a lot,” said Shante Johnson, a family friend.

“The fire started in the rear of the building,” said Assistant Deputy Fire Commissioner Donald Walker. “That was our call and that’s where our guys descended to make their attack.”

First responders said Patricia, who was a retired nurse, was found unresponsive in an upstairs bedroom. Her 77-year-old husband, Aristolle, was on the first floor of the home.

They were both rushed to the same area hospital, where she died and he remains in grave condition.

“I got off work and something was different. Something told me something wasn’t right,” relative Andre Crume. “Then I come home, but I wasn’t expecting anything like this.”

A firefighter was transported to a hospital with a minor lower leg injury, CFD said.

SEE ALSO | Man gets 205 years for killing girlfriend, 2 of her family members before setting Gary home on fire