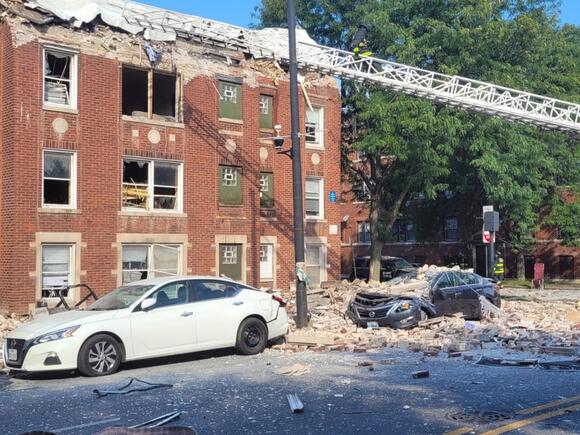 Six people were injured after an apartment building exploded in Chicago , according to city fire officials.

At least three of the injured individuals were taken to nearby hospitals with serious to critical injuries , according to the Chicago Fire Department.

On Tuesday just before 9:30am, a four-story apartment building near Central and West End exploded and partially collapsed.

The fire department evacuated an adjacent building and searched for any further casualties. At least 10 ambulances were dispatched to the scene, as well as a mass casualty bus.

It’s unclear what caused the explosion, but it was strong enough to blast the building’s bricks across the street, with some burying and crushing the roof of a car.

Investigators with the Bureau of Alcohol, Tobacco, Firearms and Explosives have reportedly arrived on scene.

WGN reports that the owner of the building issued a statement following the explosion.

“Our first concern is the health, well-being and safety of our residents,” Roman Viere, the building’s owner, said in a statement. “We are doing everything we can to cooperate with emergency services, and we are ready to do whatever we can to support our residents.”

Chicago Mayor Lori Lightfoot is also aware of the explosion and “closely monitoring the events and both the Chicago Fire Department and the Department of Buildings are onsite at the collapse,” according to WCTV.

“We will provide updates as the situation develops,” she said.

Residents reported waking up to the sound of an explosion and the destruction of their homes.

“I was asleep, and all of a sudden, there was a loud booming,” resident Lawrence Lewis told WGN. “I woke up to my windows gone, my front door blown open. I just saw smoke, and I ran out of the house. I was asleep. I’m shook up right now.”

While some residents reported a strange odour on Tuesday morning, both People’s Gas, which handles Chicago’s gas pipelines, and the city’s fire department found no evidence of a leak.