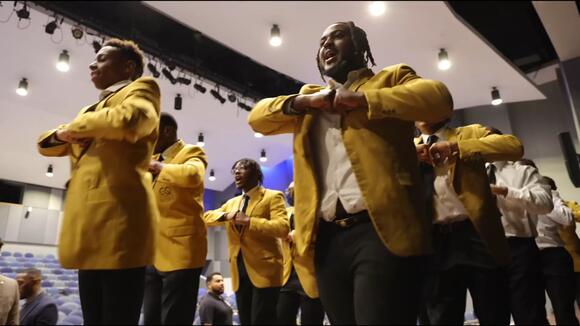 You know him as an anchor and a reporter on ABC13, but for dozens of local young men, they know Chauncy Glover as a mentor and a way out.

Chauncy launched his mentoring organization in after watching a boy die on the streets of Detroit. The teen was shot while trying to rob his school’s basketball coach. Now, the project is in Houston, changing the lives of young men through love and mentoring.

Right now, the gents involved in the Chauncy Glover Project are preparing for a big gala performance – a theatrical show – that’s all about them.

Their stories, their struggles, their tragedies and their triumphs are being told through movement, music, acting …and spoken word.

“It showed me that I can do anything as long as I put my mind to it,” said CGP gent Sakaveon Hadnot.

“These boys have some amazing stories and I believe this is a key gift stand for voice to a group of young man that often go silenced and unheard,” said program director Dr. Christina Porter.

The Chauncy Glover Project is a hands-on mentoring organization for boys of color that ABC13 anchor Chauncy Glover started in 2013. CGP has mentored more than 350 young men and sent more than 200 to college. The program provides hands on mentoring through group empowerment sessions and one-on-one mentoring. All of the gents involved in CGP focus on college readiness, manhood, mental health, chivalry, dressing for success, public speaking and financial responsibility. There’s also a community service aspect and a rigorous tutoring program.

“One thing I’ve learned is how to become more productive and have a positive attitude,” said CGP gent Ricardo Gaytan.

The young men typically come into the program shy and unsure, but they leave empowered and confident. Most of all, they gain another support system and a brotherhood.

“The brotherhood – being able to say that I have a lot of different people I can go to whenever it’s a good feeling,” said CGP gent Fred Nelson

Mentoring can make all the difference, and the proof is in students like Jerry LeDoux. When LeDoux came into CGP, he was quiet, but eventually became the…