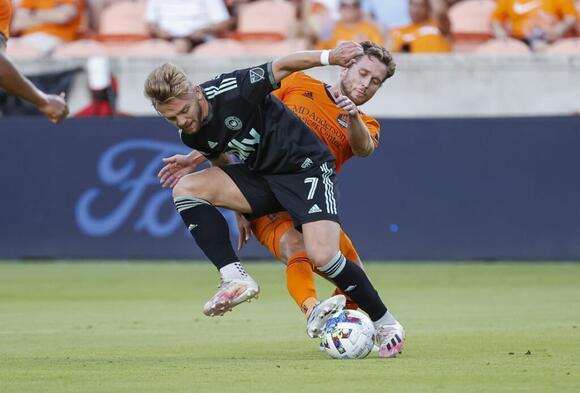 Andre Shinyashiki scored in the 74th minute to add to an earlier score on an own goal as visiting Charlotte FC held on to beat Houston Dynamo FC 2-1 on Sunday to earn its first-ever MLS road victory.

Charlotte (7-10-2, 23 points) also scored multiple goals in a road game for the first time and snapped a two-match losing streak. The expansion team has played 10 matches on the road this season and now has five points (two of them on draws) for its efforts.

Shinyashiki’s decisive goal came on a picture-perfect two-on-one play with McKinze Gaines II against Houston defender Daniel Steres. Shinyashiki faked a pass to his teammate and switched the ball to his left foot before beating Houston goalkeeper Steve Clark low to the right corner.

Houston (6-9-3, 21 points) pulled to within 2-1 in the 81st minute when Fafa Picault lifted a right-footed shot over Charlotte keeper Kristijan Kahlina on a one-on-one situation after a pass from Darwin Quintero. Offside originally waved off the goal but it was then allowed after VAR decision, adding plenty of intrigue to the final nine minutes and stoppage time.

The Dynamo have now dropped two straight games and four of their last five matches.

Charlotte struck first as ragged play on the defensive end by Houston led to an own goal and a 1-0 lead in the 28th minute.

After bandying the ball around in the penalty area, Charlotte’s Kamil Jozwiak sent a pass into the goal mouth toward teammate Karol Swiderski. The ball got past Clark but never made it to Swiderski, instead bounding off the foot and then the ankle of Houston defender Matias Vera and into the net.

Both teams had other chances in the first half. Darwin Ceren’s laser shot from outside the box was knocked away by a diving Kahlina in the sixth minute and Sebastian Ferreira had a good chance in the 11th minute that was also saved by the Charlotte keeper.

Swiderski countered with a point-blank shot saved by Clark in the seventh minute and clanged a header off the post in the 26th minute.