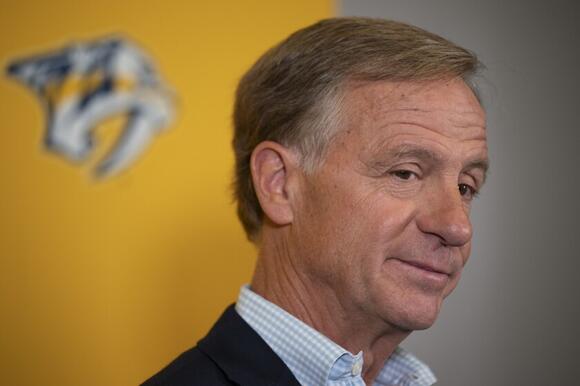 Herb Fritch wanted to start a transition away from his role as chairman of the Nashville Predators, and he saw a former Tennessee governor as the perfect person to take over as majority owner.

“We’re stable financially, we’re stable here,” Fritch said Thursday. “We’ve got a longer lease, and now it’s just finding a majority owner that’ll keep going longer than I would have and just be a good steward … and I think we’ve done that. I’m really excited as a fan to see this transition. I think it’s a great thing for the city and the franchise.”

News broke a week ago that Bill Haslam will start buying some of Fritch’s shares in a deal that won’t be finalized until this fall. The former governor will buy a majority of Fritch’s shares over the next three years and finally become the majority owner at that point. A purchase price has not been disclosed for a franchise valued recently at $680 million by Sportico.

Haslam said Fritch reached out to him to gauge his interest about six months ago: “It was a pretty quick and easy yes.”

The former governor has watched his brother, Jimmy, work in sports as owner of the NFL’s Cleveland Browns and the Columbus Crew in Major League Soccer. Haslam, who left the governor’s office at the end of his second term in January 2019, is a sports fan and said sports are more fun than other businesses when it comes to investing.

And as former Tennessee governor, Haslam sees the Predators as a safe bet.

“For me, it’s more about like this is just a really cool part of Nashville, and I want to make certain it stays that way,” said Haslam, who played hockey when he was 10 and 11.

The current Predators’ ownership group includes 17 people and 10 families. The phased purchase allows Fritch, who took over as chairman in January 2019, to remain involved and give Haslam time to learn the hockey business.

“For me, that’s a pretty good thing, right?” Haslam said. “I mean, I’m new to this. And having somebody that’s been around and been part of the ownership group since the beginning of 2007 feels really helpful to me.”

Haslam was a top executive at Saks Fifth Avenue who became president of the Pilot Co. business his father founded before going into politics. Forbes estimated Haslam is worth approximately $2.3 billion. Haslam did not rule out further investments in sports with a group in Nashville pursuing an MLB team and city officials interested in a WNBA team.

“I think sports is both an interesting and a good investment long term, and I’m really bullish on Nashville,” Haslam said.

General manager David Poile, who has been with the franchise since the beginning as an expansion team, said some changes in ownership have been good with others not so good. Canadian billionaire Jim Balsillie had a deal in May 2007 to buy the team until he started taking season-ticket deposits in Hamilton, Ontario.

Poile credits Fritch, former chairman Tom Cigarran and the rest of the local ownership with saving the team and keeping it in Nashville. They finalized a $193 million purchase from original owner Craig Leipold in December 2007.

“The team was on thin ice, excuse the pun, but it easily could’ve left,” Poile said. “A…