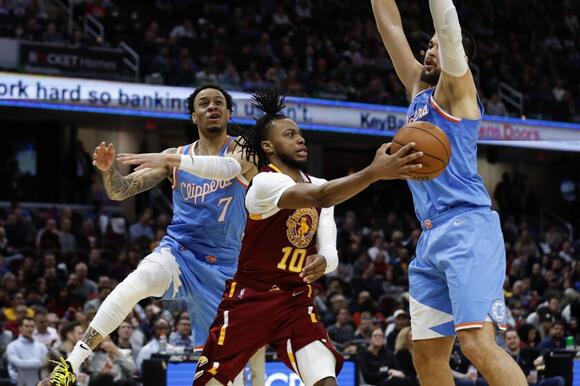 Garland’s deal is the largest in franchise history, and locks up a player the Cavs believe can get them back among the league’s top teams.

The fifth overall pick in 2019, Garland has quickly developed into one of the game’s best all-around guards. Last season, he averaged 21.7 points and 8.6 assists in 68 games while helping the Cavs win 22 more games than the previous season.

The 22-year-old Garland has improved statistically each season, but beyond that, he has grown as a leader for a rising Cleveland team that just missed the playoffs last season. He’s one of the team’s core pieces along with All-Star center Jarrett Allen and forward Evan Mobley.

Garland agreed to the same deal that another elite young guard, Ja Morant of the Memphis Grizzlies, struck earlier in the week as the majority of the league’s offseason business began getting underway.

If he makes an All-NBA team this coming season — meaning he would have to be selected as one of the top six guards in the league, unless the league changes its voting structure before then — the numbers get even bigger, going from “max” to “supermax.”

Zion Williamson agreed to a five-year, $193 million extension that has the potential to be worth as much as $231 million, two people familiar with the situation said.

The people spoke to the Associated Press on condition of anonymity because NBA rules do not allow the extension to become official until July 6.

The deal sets the stage for the 6-foot-6, 280-pound, high-scoring forward to give an All-Star caliber boost to a squad that recently proved it could make the playoffs without him.

The move signifies a desire by the 2019 No. 1 overall draft choice out of Duke to see how much his return could help a squad that improved dramatically late last season and made a surprisingly competitive playoff showing.

The Detroit Pistons have signed former Syracuse guard Buddy Boeheim to a two-way contract. Terms of the agreement were not disclosed. Boeheim led the ACC in scoring during the 2021-22 season, averaging 19.2…