Buffalo Bills have the best roster in football, according to... 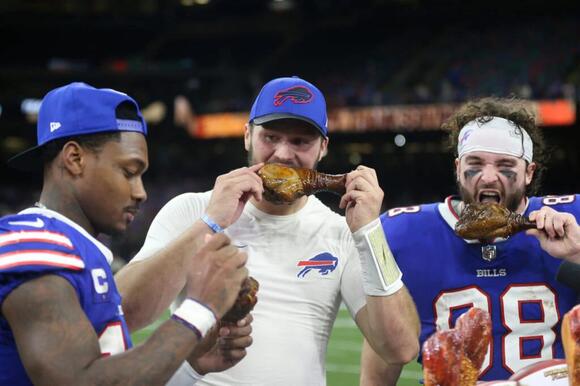 We’re less than a month away from NFL training camps opening up around the league, so naturally, the conversation about which team will be the best is as hot as ever. The Los Angeles Rams are the defending Super Bowl champs, so any talk about the best NFL team has to include them. But one other popular pick, the current odds-on favorite to win the Super Bowl are the Buffalo Bills. Why is that?

Like the Rams, its due to their stacked roster, on both sides of the ball. While both teams are built differently, the Bills are annually a popular pick to go deep into the postseason thanks to having one of the best quarterbacks in football, with Josh Allen slinging the pigskin. But as we’ve seen, it takes more than just having one of the best QBs in the game to reach the Super Bowl, you need a complete roster. It takes the full 53.

Yet, according to Pro Football Focus, the team with the best roster in football , is the Buffalo Bills. Let’s take a look at their team, while also looking at a few more PFF team rankings.

It all starts and ends with Josh Allen, who might be the best dual-threat QB in football. Sure, no one is more lethal on the ground that Lamar Jackson , but Allen can scramble nearly as well as anyone in the league, not named Jackson. But it’s obviously more than that. Allen also has one of the best arms in football, not only in strength, but also in accuracy.

The pass-catching weapons the Bills have assembled rivals any team, with Stefon Diggs leading the way, and Gabriel Davis emerging as a true second threat, and Dawson Knox has Pro Bowl potential too. They even added a potentially game-breaking running back, selecting James Cook in the second round of the draft, which could help their offense become even more efficient as a well-oiled machine. After finishing third in points per game a year ago, there’s reason to believe this offense could be even better in 2022.

So, the Bills have a great offense, which gives them just as strong of chances as any other team to stay in any game, but we haven’t even touched on the defense yet, which was the best unit in football a year ago.

The Bills have made a point to invest draft capital at an attempt to boost their pass-rushing unit, helping create turnovers in past seasons, but they’ve yet to find their second coming of Bruce Smith, or anything close. However, money talks, and they were able to sign Von Miller to a six-year contract worth $120 million this offseason, giving them an elite sack artist.

Add him to what was already an effective front seven, and the Bills have Pro Bowl talent at every level of the defense. This should only help the secondary be even better, which is tough to do when it’s led by Micah Hyde, Jordan Poyer, and Tre’Davious White.

Put it all together, and it’s not difficult to see why many, including PFF, say general manager Brandon Beane has assembled the best roster in the NFL.

While the Bills came in at No. 1 in Pro Football Focus’ best NFL roster rankings, that leaves 31 other teams in the dust. Here’s where a few other notable franchises landed in their latest article.

Had Tom Brady walked away, there’s no way the Tampa Bay Buccaneers would still be ranked No. 2 as they are, but the roster as a whole is fairly strong.

Meanwhile, at No. 3 , is a team that didn’t even reach the postseason a year ago, in the Los Angeles Chargers. If they truly do boast one of the best rosters in football, which, by all appearances they do, they’ll have to go through a tough AFC West division first.

Surprisingly, the Los Angeles Rams slip to No. 4 on the best rosters in football, but the loss of Von Miller could be impactful as the year goes on.

Coming in at No. 5 , are the Aaron Rodgers -led Green Bay Packers, who managed to trade their top receiver while building a more complete roster on defense. Seeing how their new receiving corps builds chemistry with their four-time NFL MVP will be paramount to their success, but they have plenty of capable internal options .

After the Packers are the Cleveland Browns at No. 6 , but this obviously depends on whether Deshaun Watson suits up, and if so, Read more – SPORTSNAUT