Broke Amber Heard spotted shopping at TJ Maxx in the...

It looks like Amber Heard is pinching pennies now that she owes ex-husband Johnny Depp $8.4 million in damages.

The “Aquaman” star was spotted shopping at discount department store TJ Maxx in the Hamptons on Thursday.

Sources told The Post in early June that the 36-year-old actress is “broke” due to hefty legal fees associated with her and Depp’s bombshell trial — and that was before she was ordered her to pay millions for defamatory statements.

When asked if the actress had the means to cover the judgment handed down by the jury, her lawyer Elaine Bredehoft said “Oh no, absolutely not.”

Still, Heard was shopping at the TJ Maxx in Bridgehampton, NY — where the average home goes for around $3.8 million according to Zillow — so she probably isn’t maxing out her credit cards at the big box chain. 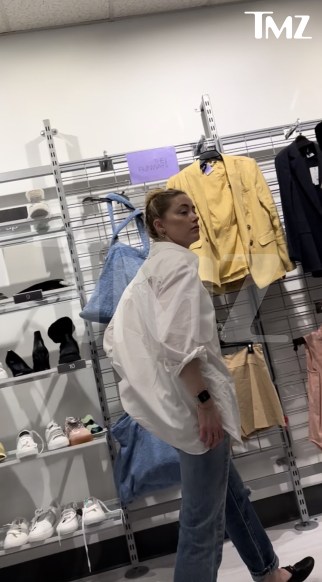 Sources told The Post in early June that the 36-year-old actress is “broke” due to hefty legal fees associated with her and Depp’s bombshell trial.

She was accompanied by her sister, Whitney Henriquez, who has been by her side throughout the trial and testified on her behalf.

It’s not clear what, if anything, Heard bought at TJ Maxx.

Multiple sources have told the Post that Heard was relying on her homeowner’s insurance policy to cover the cost of her attorneys.

Depp sued Heard for $50 million after she wrote that she became a “public figure representing domestic abuse” in a 2018 Washington Post op-ed and won all three of his defamation claims against her. Heard, meanwhile, won only one of three defamation claims she made against the “Pirates of the Caribbean” in a $100 million countersuit.

Her net worth has been estimated at between $1.5 million and $2.5 million, according to the Celebrity Net Worth site and other outlets — a far cry from what she owes Depp.