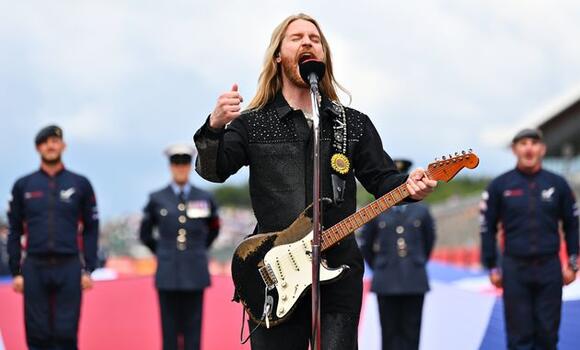 British musician Sam Ryder, who rose to fame singing on TikTok during the pandemic, absolutely killed with his rendition of Britain’s national anthem “God Save the Queen” on Sunday.

Ryder presented an extremely spirited version of the anthem (the same tune as “The Star-Spangled Banner,” thanks to a cheeky twist by colonialists) at the British Grand Prix in Northampton, England.

In May, Ryder won the runner-up spot with his song “Space Man” in the annual Eurovision song contest in which member countries of the European Broadcasting Union each submit a song to be performed on live television.

But some viewers were split over whether Ryder slayed with his innovative version of the national anthem — or obliterated it. Online publication Metro.co.uk gushed that he “ wowed fans with iconic ‘God Save The Queen,’” adding: “What a legend.”

But Rupert Murdoch ’s salty Sun grumped that fans were “not impressed.”

Here’s a range of the rest:

Fabulous!!! Never heard it sung with such passion!❤️❤️❤️😀

Man is living his childhood dream. Let him be free to enjoy every second, god knows so many of us don’t enjoy a second of our own lives!

I hardly ever watch F1 and I rarely notice God Save the Queen sung on any occasion except maybe at a football match, but Sam Ryder’s rendition just now was spectacular. I loved the ‘Oh yeah’ at the end. Respect.

Sam Ryder having an absolute ball there singing the national anthem in a far more interesting and uplifting way than we normally get.
Normally dull and dour like it’s trying to put the drivers to sleep!! #SilverstoneGP

UK locals saying Sam Ryder sounded ‘bad’ or that his rendition of God Save The Queen was ‘cringe’.

1) have you heard GTSQ? it is objectively one of the poorest national anthems.
2) Sam is a great singer and he made GSTQ interesting.
3) Who tf cares, you talentless nobody

1) You’ve no fucking idea about music

2) You voted to get rid of immigrants Read more – HUFFPOST