Bridgeport man fit to be tied after getting school zone... 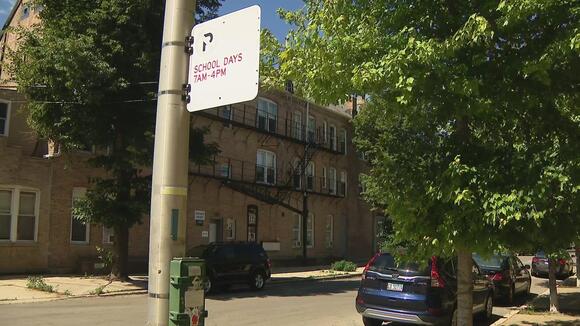 CHICAGO (CBS) — We’ve pretty much all experienced it – a flash of red when there’s a bit of orange on your car from a parking ticket.

The fines especially frustrated a group of Bridgeport residents recently. As CBS 2’s Lauren Victory reported, the residents are angrily asking what makes a school qualify as a school.

There are signs that announce no parking being allowed on school days from 7 a.m. to 4 p.m. – though they’re faded. Those signs warn of a tow zone.

Eric Wozniak could have been towed – but he doesn’t feel lucky about having only gotten a $100 ticket instead.

Wozniak admits he parked on the block during school hours. But he thinks the rules – like the signs – are outdated.

The no parking zone for school days is in front of De La Salle Institute’s Lourdes Hall, 1040 W. 32nd Pl. The Catholic school moved all its students to its Michigan Avenue campus in Bronzeville, and closed the Lourdes Hall location in 2017.

Wozniak said he has been parking on the block ever since the school shut down.

“When the school was in operation, there were lines of buses here every single day, and we haven’t seen that in five years,” he said.

The building is not totally shuttered. Religious e…