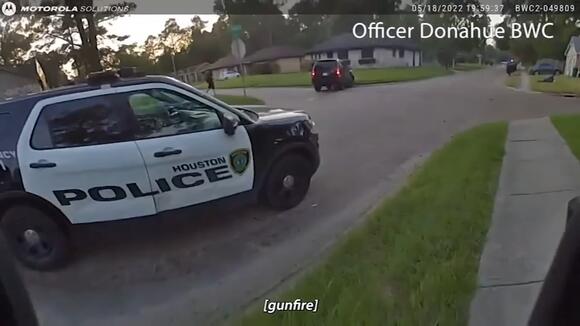 Houston police released body-worn camera footage of a shooting that killed a suspect in northeast Houston on May 18.

That afternoon, Deven Nnawuchi was allegedly threatening his girlfriend and her children while all of them were inside her SUV. Nnawuchi allegedly drove off in his girlfriend’s SUV, leaving her and the children in a neighborhood.

However, as the woman was making a police report about Nnawuchi, he returned. That’s where the body camera footage picks up.

In one series of videos, you can see Officer Donahue interviewing the woman about Nnawuchi’s erratic and dangerous behavior when he drives back through the area.

“That’s him! That’s him!” The woman could be heard saying in the video.

The video then shows Officer Donahue getting into his patrol car and giving chase. As he’s about to get out of his patrol car at the 6400 block of Heath near Cheeves, you can hear the officer saying on the police radio that the suspect had a gun.

“He’s got a gun be careful,” Donahue said.

From another angle, the body-worn camera video of officer J. Salinas shows airbags deploy in his car and a windshield cracked. That’s because Nnawuchi had just slammed into him with the SUV as he was apparently trying to outrun Officer Donahue.

The video shows Officer Salinas getting out of his car, taking cover from behind a house, and also opening fire.

It’s unclear where all the gunshots came from in the video, Houston police say two officers discharged their weapons after the suspect took a shot at them with his gun. No police officers were hit.

Three body-worn cameras then capture from different angles, officers approaching an injured Nnawuchi after he was hit multiple times. Nnawuchi fights officers’ efforts to put his hands behind his back, and handcuff him. Once he was secure, the video shows Officer Salinas, clearly suffering the effects of the car crash, sitting on the ground, while other officers check on him.

“I’m good, I’m good, he just ran straight into my car,” said the young officer. Officer Salinas then gets up an…