Big Bay Boom: What to know about San Diegos fireworks... 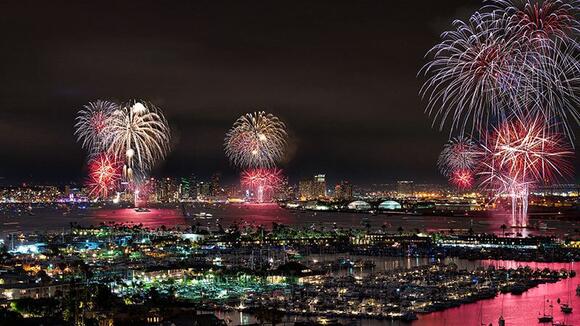 SAN DIEGO — San Diego’s largest fireworks show is back and ready to put on a spectacle on July 4, and FOX 5 has you covered for all the action.

For those who want to watch from home, tune in to the live telecast on FOX 5 or on our website from 8 to 9:30 p.m. Viewers outside of San Diego County can watch the show on KTLA 5 Los Angeles or FOX 40 Sacramento, while listeners can hear the broadcast live on KGB 101.5 FM radio. A delayed television broadcast will be on Fresno KGPE from 9 to 10 p.m. and on Bakersfield KGET from 10:30 to 11:30 p.m.

“The Port of San Diego is proud to sponsor the Big Bay Boom,” Port of San Diego Chairman Dan Malcolm said in a news release. “This is one of the Port’s major annual holiday events and one that the region’s residents and visitors look forward to every year. It’s also an incredible economic boost for businesses that operate on and around San Diego Bay.”

Launched in 2001, the Big Bay Boom has taken place every year since its origin except for a pause in 2020 due to the coronavirus pandemic.

Celebrate the carousel’s 100th year in Balboa Park this summer

Public transportation, ride share or bicycle is encouraged as parking for the large event will be in high demand, the port authority say…