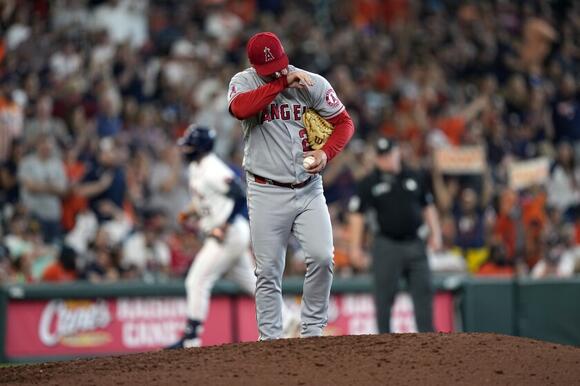 Martin Maldonado homered twice, and Jose Altuve, Kyle Tucker and Chas McCormick each added a home run as the Houston Astros built a big lead early and didn’t let up in a 9-1 rout of the Angels on Saturday.

The Astros followed up their 8-1 win Friday in the series opener with another lopsided victory to extend their winning streak to five games.

Houston starter Jose Urquidy (7-3) yielded two hits and a run with eight strikeouts in six innings to improve the team’s starters to 7-0 in the last nine games. This was the fifth straight game in which the Astros gave up no more than one run.

The Astros were already up 3-0 when Maldonado, who had only one hit in his previous four games, connected off Patrick Sandoval (3-3) to start the second inning.

Houston led by four in the sixth when Maldonado hit the first pitch from Andrew Wantz over the wall in straightaway center field to make it 6-1. It was the fourth multihomer game of Maldonado’s career and his first since 2019.

Four pitches later, Altuve gave Houston back-to-back homers when he hit an opposite field shot to the seats in right field.

Aaron Loup took over for Wantz to start the seventh and was greeted with Tucker’s home run to right field. There were two outs when McCormick homered for the second consecutive game with his drive that extended the lead to 9-1.

Taylor Ward hit a solo home run in the third for the Angels, who continue to struggle offensively. Mike Trout went 0 for 4 with four strikeouts and is 0 for 7 with seven strikeouts in this series.

Sandoval gave up eight hits and five runs while tying a season high with nine strikeouts in five innings for his second straight loss.

Yordan Alvarez, named AL player of the month Saturday, returned after sitting out two games following a nasty outfield collision with Jeremy Pena on Wednesday. He went 0 for 4 with a walk.

Tucker singled to score Altuve and put Houston up 1-0 in the first. Yuli Gurriel walked to load the bases before a single by J…