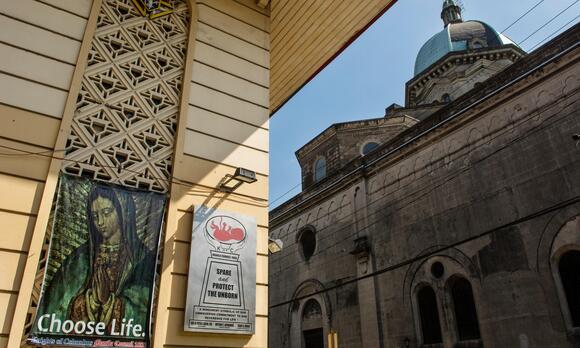 Shortly before a courier arrived, Anna*, a scared, pregnant young woman from the Philippines, had received instructions on Facebook from the seller about how to proceed when she received her packet of medication containing cytotec, cortal and tablets to prevent bleeding.

She should fast for the day. She must not eat rice but just snack on crackers and drink cola. Anna paid 1,000 pesos (£15) upfront, with a second 1,000 peso due if the abortion was successful.

Anna feared she would be judged for becoming pregnant, says her younger sister Carla*. There were few people the 20-year old could turn to. Her relationship with her partner, the father of her first child, had broken down, and she had been asked to leave his parents’ home. Her parents were convicted of drug offences and have been in prison since she was 10.

“She didn’t want people to tell her she is dumb,” says Carla. “She said she was afraid [to have an abortion], but she really wanted to do it.”

The Philippines has one of the strictest anti-abortion laws in the world; while the government has acknowledged that the law may allow abortion to protect the life and health of pregnant women, in practice such exceptions are not made. Women have little choice but to resort to whatever underground treatment they can access and afford, regardless of risk.

An estimated 1.1 million Filipina women have an abortion every year, according to a University of the Philippines study in 2020, which predicted a rise as heath services were disrupted during the Covid pandemic. And the number has been growing, says Jihan Jacob, senior legal adviser for Asia at the Center for Reproductive Rights. “Like in any other country which has restrictive laws, it does not prevent abortion, it just makes them unsafe,” she says.

Women, especially those in urban areas, have increasingly sought treatment online – a trend that Covid accelerated. “You cannot travel to Quiapo [a market known for selling herbal treatments] with a pandemic and with all the lockdowns and restrictions, so everyone has to resort to finding other ways. That’s usually going to online platforms and forums, or even online shopping platforms,” says Jacob.

It was 2am, a few hours after Anna took the pills, when Carla knocked on her Aunt Rose’s bedroom door for help. Anna was feverish and distressed. She had wrapped herself in a comforter but couldn’t stop shivering. Her forehead was hot. They tried to calm her, but she wasn’t making sense.

“She asked Aunty Rose: why do you all look violet in my eyes?” remembers Carla. “She thought she was chilling, but actually she was sweating.”

They spent the next four hours travelling by tricycle and then by car from hospital to hospital in Cavite and then, northwards, in Manila. They were repeatedly turned away; one facility said the relevant ward was only accepting Covid patients, another demanded a large deposit before treatment.

One hospital worker suggested Anna needed psychiatric care. “I kept telling her to be calm, that help would come soon,” says Rose.

The next afternoon, a doctor at a hospital that finally accepted Anna explained she was in a critical condition, experiencing complications from an abortion.

In the hospital, Anna received a message from the Facebook seller, who was due a second payment – the other 50% – and wanted an update. “Anna became angry. She said: should I pay you? I’m also 50:50 here in the hospital,” Carla recalls. The seller blocked her.

She spent one month and 15 days in hospital. While there, she told relatives she didn’t want treatment and would rather die. Her aunt, struggling to raise funds to cover hospital bills, walked to visit her because she could not afford public transport.

Anna stabilised and continued dialysis for months at home, she stopped treatment prematurely. She became progressively ill over the next seven months. She tried to restart treatment but her family could not afford the fees, her aunt said. She died in July 2021.

Across the Philippines, many women face the same decisions as Anna, feeling they have no choice but to risk their lives seeking illegal terminations. The latest estimate, from 2008 , suggested that as many as 1,000 women died each year from complications related to unsafe abortions. It is feared that this has increased to more than 2,000 – six women a day – due to the rising number of abortions, and ongoing restrictions that prevent access to safe services.

“These are still preventable deaths and unnecessary suffering among women,” says Jacob.

Activists suspect that online sales in abortion pills have soared during the pandemic. On forums, women share advice and reviews, trying to point others towards reliable providers. Sellers post their phone numbers, alongside promises that they are legitimate and speedy, or send private messages to new group members.

There are harrowing stories of what can go wrong. Women describe medications that simply didn’t work or unbearably painful.

When something goes wrong, nobody knows what women have taken or who sold it to them

Some women approach traditional healers in their communities, who offer vigorous massages to induce an abortion. It’s a painful and dangerous procedure, says Dr Junice Melgar, co-founder of the Likhaan Centre for Women’s Health: “It happens not just once – you have to do it several times until you bleed.”

Patients are left black and blue with bruises. Others buy herbal medicine. Outside Manila’s Quiapo churchstalls offer bottles labelled Pampa Regla (to induce menstruation) alongside tables packed with rosaries and religious icons – a sign of how abortion remains an open secret in the Catholic country.

Abortion medication is more potent and safe, says Melgar. “When you talk with an obstetrician or gynaecologist, [they say] that actually with the introduction of medication pills that they have noticed less septic abortions,’ she says.

But there is no way to know what is in pills bought online, and even less recourse when things go wrong. There has always been virtually no accountability for those providing dangerous or useless treatments, as the fear of prosecution and stigma deters women from reporting to authorities or confiding in relatives.

In the past some sellers in the community might have helped look after women if they became ill, says April*, a researcher at Likhaan, a friend of Anna’s family. Now, when something goes wrong, nobody knows what women have taken or who sold it.

Some argue that attitudes are changing in the Philippines. While older generations remain conservative in their views, younger people want change, says Graciella Moises, a 20-year-old women’s rights advocate.