After teen deaths from fentanyl, LAPD chief says drug has... 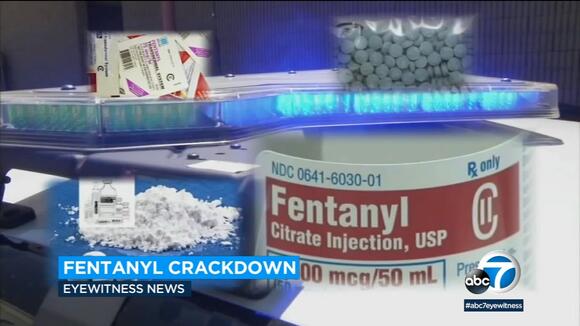 When 15-year-old Melanie Ramos died last week at a Hollywood high school after taking a cheap, knock-off pill laced with fentanyl, her death shocked the community and spurred days worth of headlines.

But what most people may not realize is that Melanie’s death is far from rare.

“The number one threat to the country is fentanyl,” said Los Angeles Police Department Chief Michel Moore. “The ready supply of this is resulting in overdoses and deaths.”

Two teenage boys have been arrested after a 15-year-old girl fatally overdosed at a high school campus in Hollywood, authorities announced.

According to the U.S. Drug Enforcement Administration, fentanyl is a 100 times stronger than morphine.

And Moore says these days a large portion of drugs being sold in L.A. are laced with the potentially deadly drug.

“The department continues to seize tens of thousands of pills and pounds and pounds of fentanyl,” Moore said.

The DEA considers just two milligrams of fentanyl to be a lethal dose. And just one pound of the drug contains 454,000 milligrams.

Ramos died in a restroom at Bernstein High School in Hollywood, and investigators say she and a friend bought the drug on the school’s campus.

In just the past week, Moore says five other youths overdosed on fentanyl-laced drugs in the area around Bernstein High, but survived.