Mercy Baggs is contemplating her future. “Should I live to 95, I’ll do another parachute jump,” she says. She first jumped when she was 77, to commemorate her stint as mayor of the Wiltshire town of Calne. Then she jumped again last March, a day before her 90th birthday, to raise funds for Wiltshire air ambulance.

“It’s the thrill of it,’ she says. “You go up, and then that door opens and the wind starts to come through. You are strapped to this guy and he slides you out. Suddenly there’s a touch on your head, and vroom, you’re away. You free-fall. You free-fall for a long time.”

Baggs, 90, was born in 1932, the seventh of eight children, and grew up in Fulham, south-west London. “We all had fleas on our heads,” she says. “If you didn’t have fleas you were posh.”

The poverty was such that Baggs “didn’t have knickers to go to school with”. Her big sister enterprisingly safety-pinned her vest between her legs but it came undone at school “and all the kids were laughing at me. The teacher was in tears. She took me up. She put clean underwear on me and gave me spares to take home. We were so poor – I make no secret of it. But there was love,” she says. 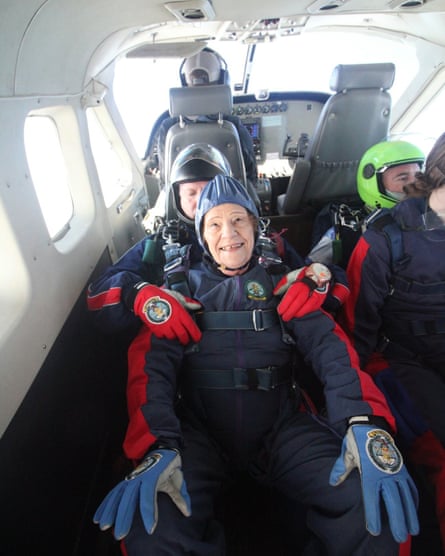 Ready to jump … Baggs is harnessed up and all set.

During the second world war, when she was seven, she was evacuated to Shottermill in Surrey. And there began “the happiest six years of my life”. She remains close to Betty, now 93, the daughter of the family she stayed with; they speak on the phone twice a week. Baggs credits her “great faith” to her time in Shottermill, where she learned to say her prayers each night.

Of course, every time the headmaster appeared in the classroom, all the children feared he was bringing bad news. “I am very, very sensitive to people who are more unfortunate,” Baggs says.

As a young adult, she joined the British Transport Commission police, but dealing with children who couldn’t find their parents was too much to bear. “I knew what they were going through, having been evacuated. My dad said, ‘Look, it’s getting to you.’ It was. When you’ve been through it yourself … I like kids. I really do.”

She left the police and did stints with British Gas, Marks & Spencer and North Wiltshire council. But no doubt her childhood fed into her actions as a councillor, and later mayor, in Calne, where she helped to set up a drop-in centre for young people. “We raised money ourselves. We ended up with six computers, a pool table, wifi – until 2018 when the rent became too expensive. 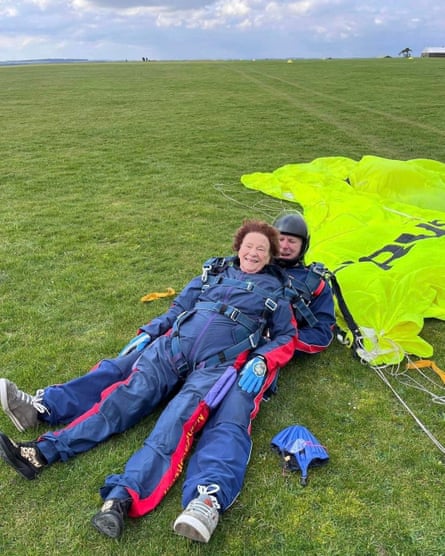 ‘There’s a world out there. There’s a life out there’ … Baggs after a smooth landing.

“Those youngsters now are in their 30s. And they’ve got children of their own. I’ve seen them,” Baggs says. The drop-in was one of the causes she raised money for with that first leap out of the plane.

But why a parachute jump? At the time, her late husband, John, was ill with bowel cancer. “He said, ‘I do wish you wouldn’t do it.’ I said, …