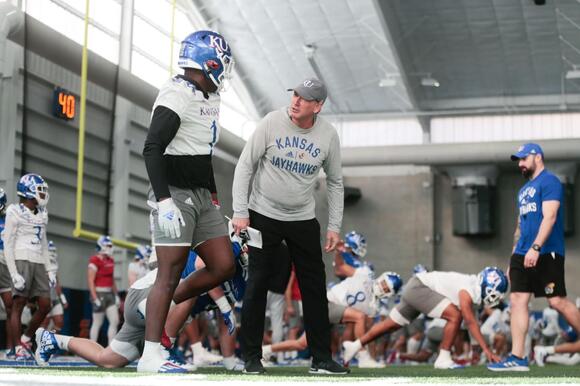 Lance Leipold’s ability to build programs hasn’t gone unnoticed, with the most recent example highlighted in a new ESPN article by Bill Connelly.

Programming Note: I’m shifting around some of the “normal” scheduled items to make it a bit easier to hit things in a more timely manner. Specifically, I wanted to hit today’s topic, and the podcast previews are now slated to come out of Fridays moving forward, which means that our positional previews will be moving to Sundays.

Every offseason there are countless articles that get written about random coaches and programs that for one reason or another pique the interest of the national sportswriters as they look ahead to the next season. It’s not often though that those stories center on the Kansas Jayhawks.

Typically it’s for some random HILARIOUS story about the quirky head coach’s acting career , or why the team is worth watching just for the antics of said head coach .

When the articles focus on the on-field prowess and future outlook of the program, it’s typically to make jokes like ” at least they are getting exercise ” or callbacks to snarky jokes from the prior season s.

Which is why the a rticle put together by ESPN’s Bill Connelly was notable. It’s only available for ESPN+ subscribers, but if you have the subscription, it’s definitely worth a click. Sure, the headline probably didn’t do him any favors on Twitter, but the main takeaway from Bill himself is what I really want to highlight.

Most notable is the guarded optimism that seems evident in both this tweet and follow-up ones. That’s not the say that Connelly thinks the Jayhawks will get turned around drastically this season. But in his interactions with the Kansas coaching staff, he shares some of the biggest signs of the different feeling around the Kansas program these days:

We’ve heard the buzzwords of “building a culture” several times since the hiring of Leipold. But it’s been difficult to get a clear definition or example of what they mean by that phrase, until now.

I talked about it in the prior piece in the countdown, but one of the common refrains of Kansas coaches the last decade has been that the players just don’t seem to be getting it. Charlie Weis, David Beaty and Les Miles all stood up in post-game press conferences after losses and talked about how their messages just weren’t getting through to the team. Or they knew what they were supposed to be doing but they just weren’t executing it.

But looking at those teams, there were way too many plays where players were out of position. There were way too many times where pre-snap motion caused the defense to scramble and try to figure out who was supposed to be moving, only to have multiple guys caught out of position on the play. It’s fair to say that those teams didn’t have veteran leadership from players out on the field, and that a lot of that had to do with a disconnect between the coaching staff and those leaders in the locker room.

And that’s why this is just the latest positive sign in the building of this program. When the coaches compla…