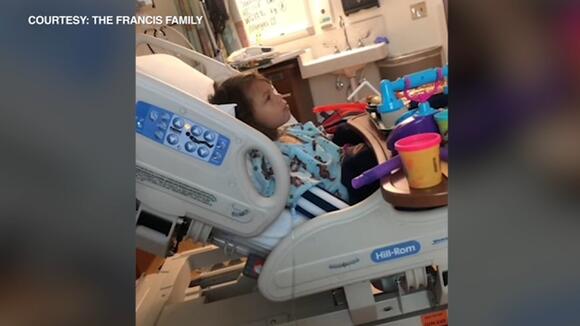 A family is left stunned after a 6-year-old girl was run over by a teenager on an electrical bicycle.

The girl’s family said the teen hit her while speeding on the sidewalk.

“It’s really hard! We haven’t been able to eat or sleep because I have that image playing through my head,” the girl’s aunt, Kayla Corral.

The family said they took the girl to one hospital, where she was first listed in fair condition. They then brought her to Lurie’s, where doctors found her injuries were much worse.

“She just disappeared! My brother was like, ‘Where’s my baby?’ And, we look and she’s over there,” Corral described.

It all happened within seconds, just as six-year-old Meilan Francis had her father in her sight.

“She threw her arms out and said, ‘Daddy!’ to go give him a hug on the sidewalk, and she ran out to the sidewalk right here and that’s when the guy came and hit her and dragged her all the way to the bus stop over, maybe like, a couple inches, few feet,” Corrall recalled.

It happened Thursday afternoon right outside Corral’s apartment on Fullerton near Keeler avenues on the city’s Northwest Side, police said.

“He hit her really hard and then she got caught up in his wheels, and she was stuck and he dragged her over there. She finally got untangled and he was just looking back, saw her on the floor and just kept going when we were waving him down,” Corral said.

She said a nearby police officer caught the 16-year-old a couple blocks away before the family rushed the girl to Community First hospital, where she initially was listed in fair condition.

But Corral said they then took her straight to Lur…