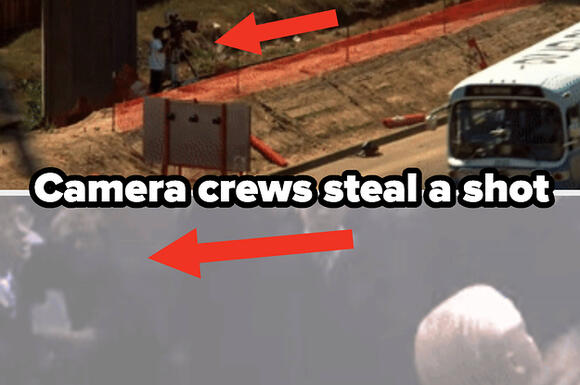 Movies don’t get made without the wonderful work of camera crews. But let’s be honest: With all the moving parts that make “movie magic” possible, you’re bound to forget your crew is there amidst the action.

So I’ve compiled a list of times the camera crews got a little too involved in the their films:

1. In Harry Potter and the Chamber of Secrets, you can see a WHOLE camera crew on the left side of the shot when Snape picks up Malfoy during the dueling club scene. They tried to darken it in the final edit, so I brightened that sucker up:

2. In the middle of a shootout scene in Terminator 2: Judgement Day , a crew member outside decides to get a look at the fight through the window, unaware he is in frame. It kind of ruins the tension of the scene to see a man calmly observe the action.

Look at my man being all sneaky:

3. During the chariot battle in Gladiator, you can see a hooded crew member aboard the chariot seconds before a bloody death scene. Unless the Romans were sporting black work boots and a hoodie in Ancient Rome, I’d say this wasn’t meant to be seen.

4. In Pirates of the Caribbean: The Curse of the Black Pearl, a very unique shipmate is aboard. Or, should I say, a quite literal crew member:

5. In The Matrix , we have one scene where you don’t just see “The One” and Morphius in the reflection of the doorknob. You can also see a camera:

6. During a cool action shot in Speed , showcasing the police chopper diving into frame in front of a speeding bus with an escort of squad cars, you can just flat-out see the camera crew under the bridge.

The one legitimate argument that I could see for this goof is that this ties into the storyline and can be written off as “press” following the “very real car chase” in canon:

7. Sometimes the camera itself takes friendly fire. Here’s Jack raging in The Shining, when one of the items he knocks off the table hits the top right of the screen, bouncing off the camera and ricocheting across his walking path.

8. Here’s another one, in Lord of the Rings: The Fellowship of the Ring, where Aragorn walks by and (what I believe to be) the top of his bow hits the camera screen. Look closely at Frodo and the tree behind him, because you can see the shot lift from the little nudge:

It’s hard to make out at first, but in motion, it’s too obvious it is the camera mount: